View source
watch 01:36
We're Getting Mutants in the MCU - The Loop
Do you like this video?
Play Sound

Two
Celeste Newsome was a supporting character in The Selection Series. She was a Two chosen for the Selection and was the highest ranked competitor in the competition. She was also one of the Six Elites in Prince Maxon's Selection in the first three books of the Selection series.

Celeste grew up as a privileged Two in the Province of Clermont as a model with ads in magazines. She stated that she once had a black and white themed birthday party where admittance through the door required black and white clothes to attire. Any color, she said, was refused entry. She said that Tessa Tamble (a pop star) sang at her party.

Celeste was first met by America when she arrived at the airport in which America Singer, Marlee Tames, and Ashley Brouillette were also traveling. She wore high heels with her Selected outfit. She stated that it took her so long to arrive because she was signing autographs.

Celeste proved to be quite mean and power-hungry in the Selection after she gave Marlee and America rude looks for getting positive attention from the press on the news.

She befriended Bariel Pratt and was able to bond a little with Maxon over his love of photography and her modeling career (as told by Maxon in The Selection Stories: The Prince and The Guard). Celeste provoked Anna Farmer to slap her one day after saying something insulting about Anna's parents. Anna was eliminated from the competition because physical contact with the other Selected is not allowed in the Selection and is grounds for dismissal.

Kriss Ambers had her birthday party hosted at the Palace. Celeste became jealous at the attention Kriss was getting, so when all the girls were gathered she "accidentally" spilled some of her red drink on Kriss. Kriss fled in tears before Prince Maxon went to console her on her party dress as Celeste said it was an accident (Tuesday Keeper, however, agreed that Celeste had spilled her drink by accident).

America's maids told her that Celeste would occasionally hit her maids in her room if they did something she did not like. Celeste proved to not be above physical harm when she scratched America on the shoulder and tore her dress after America refused to switch dresses with her. America had chosen a red dress among the blue dressed the rest of the girls chose for their interviews on the Capital Reports Selection interviews with Gavril Fadeye, something that made Celeste jealous.

Maxon chose Celeste as one of his six Elite girls at the end of the novel.

For the Halloween Party, Celeste dressed up as a peacock, but America stated that it seemed like her maids had messed up the costume a bit when they made it. Celeste drank a bit that night and talked to the guard Aspen Leger in the hallway, where she told him that he should consider a career in modeling and that if things did not "work out" between her and Maxon, Aspen should find Celeste. The next day she confronted him again and stated that she was simply trying to have a professional conversation with him - which was anything but the truth and which Aspen knew and almost told her when she made the claims.

When Marlee was caned, Celeste was frightened and sickened by watching the caning, since she and the other Elites had to sit in the front row during Marlee's punishment.

When Celeste was talking about how horrible Marlee was for having a relationship with someone other that Maxon, calling her a rude name in the process, America jumped at her, slapping her a few times. Celeste fought back by scratching America before guards pulled them apart. Both girls stayed at the Palace Hospital where Maxon visited them. Neither of them was sent home because both of them got into the fight and their actions canceled each other out. Maxon justified their actions to his father, claiming that they were stressed and upset after Marlee's caning.

Celeste hosted the German Federation along with Elise Whisks and Natalie Luca for one of their Elite projects. Celeste decided to wear a bold colored dress along with a revealing neckline that was the opposite of the beliefs of the German Federation who were wearing sleeves up to their wrists. Natalie also supplied the wrong flowers which had to be changed immediately, so the girls lost to America and Kriss who hosted the Italians.

In The One, when America found Celeste crying in the library, Celeste confided in her that the reason she wanted the crown so much was because she would be needed by people if she became a royal. She says that unlike America, who likes to hide in the shadows, Celeste needed the spotlight on her. She says that a model was no longer wanted after a certain age, thus becoming unemployed. America, seeing Celeste in a new light, began a small friendship with her.

Celeste later apologized to the rest of the Elites for what she had done to each of them and they all forgave her.

During the Elites makeover day, Queen Amberly was invited to join them. When asked for his camera, Maxon arrived and gave it to them, then asked if he could come in. They, however, slammed the door in his face and continued on.

When Maxon was about to announce the winner of the Selection, the rebels revealed themselves from their disguises. One marched up behind Celeste and shot her in the back of the head.

The novella Happily Ever After Companion to the Selection Series included three scenes from Celeste's point of view.

This scene features the first meeting of Marlee Tames, Ashley Brouillette, America Singer and Celeste Newsome during The Selection.

In this scene, Celeste describes the kiss between her and Maxon in the hallway. The kiss is also described by America Singer during The Elite. Celeste`s plan was to get Maxon to sleep with her, so she would have a chance to become pregnant, shortening the Selection process.

This scene plays during Christmas in The One. America is in Carolina burying her father. The last girls are unpacking their Christmas present given by Maxon. Maxon tells Celeste that she is no longer competing in the Selection.

Because of Celeste's arrogance and sense of superiority over the lower caste competitors like America Singer and Marlee Tames, none of the competitors really liked her. Celeste was intimidating to the other girls because she was too confident and knew how to use her beauty when it came to men.

Celeste was willing to do anything to win, even breaking the rules of the Selection. She tricked Anna Farmer into slapping her after criticizing her parents, which got Anna kicked out of the competition because violence against other competitors was against the rules. Before the interviews with Gavril Fadaye, Celeste told America to trade dresses. When America refused and called Celeste a brat, Celeste ripped one of the sleeves in anger and walked away. When America went to take her seat, Marlee and Emmica helped hide the ripped sleeve. It was also rumored by the maids that once she slipped glass in another Selected's slipper (which was later discovered to be Elise Whisks). Elise also had to be excused from breakfast because Celeste put bleach in her shampoo. The Selected were scared that she would get worse if they told someone so they didn't dare to tell Maxon.

However, in The One Celeste changed, building up a friendship between her and America. America especially got her to know better, understanding that Celeste was raised up to be a specific type of pretty. Celeste later confessed that she wanted the fame more than love. On her wedding day, America stated that she thought of Celeste being with the other Selected and winking at her, showing the short their friendship they built up.

Celeste had brown hair and light brown or blue eyes. America noted that she wore a lot of makeup. Celeste is supposed to be strikingly beautiful and tall being a model, but also due to her personality. She tends to wear more flashy and revealing clothing and jewelry. She and America Singer were the only two to not have a full-on makeover. America noticed that she painted her nails at the Women's Room. It is assumed that she liked her nails always polished. 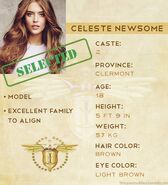 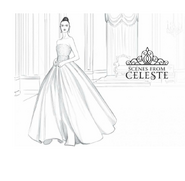 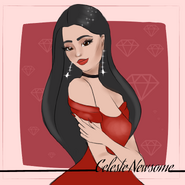 Meet Celeste! The Diva of the Selection!