Three (formerly a Four)
Elise Whisks is a supporting character in The Selection, The Elite, and The One. She was a Four chosen for Prince Maxon's Selection. She was also one of the Six Elites.

Elise was from Angeles. Her parents own luxurious hotels. Being born into a rich hotelier family, she gave up her payments voluntarily after Maxon cut the compensation for the girls that were natural Twos and Threes to fund the food program for the lower castes (5-8).

Elise was not mentioned very much in The Selection except for one day when she was absent from breakfast due to the fact that Celeste had filled her shampoo with bleach and her maids had to re-dye her hair black. Elise also stated later that Celeste put glass in her shoes, and while Celeste did not admit to it, Elise knew that it was Celeste who tried to sabotage her. The advisors and King Clarkson made Maxon choose Elise as one of the six Elite because of her connections with New Asia in the attempt to try to put a stop to the war they had been fighting for years, although later it is mentioned that the war was over-exaggerated by the king.

After Olivia Witts had announced to some girls in the Women's Room that Maxon had kissed her to everyone and the girls talked to her and had discussions, Elise "burst into the room, followed by Zoe and Emmica." She "squealed" and showed off combs that Maxon had given her, two which covered in expensive looking gems.

Elise is shown to still not be totally open with Maxon and the same goes for him. She dressed in full New Asian clothing for the Halloween Party at the Palace. When Marlee Tames was caned Elise showed disdain when she was made to sit in the front row along with the rest of the Elite. America stated that Elise looked sick.

Elise hosted the German Federation with Celeste and Natalie, but they lost to America and Kriss (who hosted the Italians) because Celeste dressed too revealing and flashy and Natalie used the wrong flowers before the flowers were promptly removed. She complimented America on her project with Kriss. America thanked her and happily said that she could put in a good word for Elise to Maxon. Elise said that while she would say something positive to Maxon if he asked about America, she would not go out of her way to help her. After stating that the Selection is a competition to America she walked away.

When Maxon went to New Asia with his father, he asked Elise to call her family and have them "go easy" on Maxon and his father before they went to the other country. When there was trouble, Elise said that she had called her family, but they said that the Prince and his father had never arrived. Elise became worried and America stated that it was probably due to the fact that the connections that Elise had with New Asia were the only thing keeping her in the Selection. Maxon and his father made it back safely, to the relief of everyone.

Elise was shy when the girls were pointing out exercising guards that were running laps outside on the track. She then mentioned that she had kissed Maxon three times when the girls all started saying where they were romantically with Maxon.

For the Convicting, Elise wore a gown that was gold and cream woven together in a slim gown that was also sleeveless with gloves making the outfit dramatic. Prince Maxon gave her a necklace and set of earrings that were "dark gems that made her slick hair and eyes "pop". When America suggested that they not comply with the Convicting and simply do nothing, Elise accused America of trying to sabotage the rest of them because America would be going last, and if she was the only one to do as she was told, she would look better. For this reason, none of the girls went with America and instead did the Convicting- but America stated that they did not seem happy with the long sentences for petty theft. Elise had to convict Jacob Digger, who had twelve years for stealing some clothes, but it was actually due to the fact that he was against the King.

Elise was eliminated with Celeste when Maxon chose America and Kriss as his final two. Elise was upset over her opinion of not bringing honor to her family and stayed in her room during the party in the Women's Room with all of the Selected girls (except for Marlee, of course), but congratulated America.

According to Kiera Cass, "Elise wore her loss of the Selection as if she had been publicly shamed, and after the violent rebel attack on the day of the engagement announcement, she could never bring herself to set foot in the palace again, not even for Maxon and America's wedding.

What Elise didn't know was that the war with New Asia was mostly for show. It began over a minor trade issue and was amplified and perpetuated by King Clarkson. He kept the war going so that the public would focus less on issues at home, and he manipulated the draft as a means of keeping the lower castes and potential rebels in check. Maxon had realized something was off shortly before the Selection began, and his visit to New Asia confirmed his suspicions. Battles were staged in poorer areas, as the president of New Asia sought to protect the larger and more necessary cities, fearing Clarkson’s ability to crush them. Thousands died on both sides defending nothing.

Elise thought her alliance was much more valuable to the crown than it ever really was and assumed her marriage to Maxon would bring a peace that his father never intended to allow. But Maxon had begun quietly planning for a way to end the dispute as soon as he returned from that fateful trip, and shortly after his reign began, he drew up a truce between the two countries and enlisted Elise as an ambassador. She considered it an honor to serve her country and family in this way and agreed to go.

On one of her many trips, she had a public meeting with the head of a company that was using a portion of its profits to rejuvenate the areas most depleted by the war. The son of the CEO was enchanted by Elise’s mastery of etiquette, languages, and books, not to mention her beauty. He kept in contact, eventually asking her family for her hand. They agreed enthusiastically, knowing this young man would inherit a fortune and had a solid standing in New Asia’s society.

Elise’s joy at pleasing her family surpassed her worries over marrying someone she’d only met a few times, and she trusted her family's judgment. She moved to New Asia, not caring whether she would find happiness with her new husband. To her complete surprise, she did. He was incredibly generous with her, patient in waiting for her affection to grow, and absolutely doting on her when she became pregnant.

She remained poised in her interactions with her family, but whenever she could get in contact with Natalie Luca, she gushed over her kind and handsome husband. Elise had two boys, who became the pride and joy of her husband and family. She was in love and happy, accomplishing more than she had ever hoped she could, and never mourning losing her chance to become a princess."

Jeweled combs: Maxon had given Elise a beautiful set of combs that are covered in expensive stones.

Convicting jewelry: Elise wore this to the Convicting. It had "deep dark gems that made her slick hair and dark eyes pop".

Elise is twenty years old. She has jet black hair and black eyes, which might come from her Asian blood. Her eyes had a slant which suggests East Asian descent. She is 56 kilograms in weight and 5 feet 7 inches tall. She preferred to wear demure dresses. In terms of taste, it mirrors her well-bred personality. Unlike Celeste, who wears flashy, sometimes skimpy clothing, Elise preferred dresses that do not reveal too much skin or decent yet ravishing.

While seeming very elegant and mature, Maxon confided in America that Elise agreed with everything he said. Maxon tried to contradict her, but she conceded the point. Elise is extremely competitive but unlike Celeste, she competes fairly. She values honoring her family greatly, citing it as the reason why she wants to win the Selection. Elise was very reserved in The Selection, and, while still reserved in The One, opened up a lot more to the other girls. She is very loyal to her family. She values her culture and heritage. It is assumed she is Chinese because she stated that she wants to incorporate red in her wedding and she also stated that the groom must give gifts to the bride's friends as a thanksgiving for letting her marry him. She also states that marriages are arranged which is a Chinese tradition. It is also possible that because of discipline and heritage, she shows being well-bred in the exterior part only. She always displays proper poise and a mastery of etiquette. She isn't a quitter, as shown when she never broke from Celeste doing bad things to her. She is calm and cool but in some occasions, she squeals excitedly or has a temper when angry. 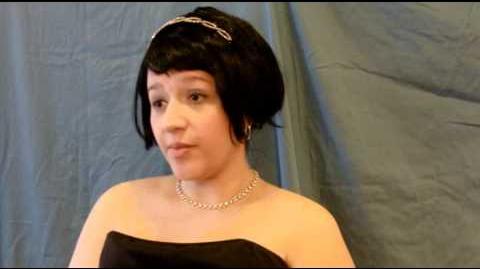 Meet Elise! The Perfectionist in the Selection!