This article is about the novel. For the Six Elites, see The Elites.

The Elite is the second book in The Selection Series and the main trilogy by Kiera Cass, preceded by The Selection and followed by The One. It was released on April 23, 2013.

Thirty-five girls came to the palace to compete in The Selection. All but six have been sent home. And only one will get to marry Prince Maxon and be crowned princess of Illéa.

America still isn't sure where her heart lies. When she’s with Maxon, she’s swept up in their new and breathless romance, and can’t dream of being with anyone else. But whenever she sees Aspen standing guard around the palace, she is overcome with memories of the life they planned to share. With the group narrowed down to the Elite, the other girls are even more determined to win Maxon over—and time is running out for America to decide.

Just when America is sure she’s made her choice, a devastating loss makes her question everything again. And while she’s struggling to imagine her future, the violent rebels that are determined to overthrow the monarchy are growing stronger and their plans could destroy her chance at any kind of happy ending.

The book starts off with America and Prince Maxon on a date together at night in the garden, but a guard tells them that it would be wise of them to go inside soon.

America becomes a threat not only to Maxon and the kingdom, but to all of Illéa. The castle is attacked again by the rebels and a new threat from New Asia arrives, in which Elise negotiates with her connections to stop it.

America becomes eager to know what Halloween is, so Maxon takes her to a secret room full of banned books and a computer. To make America happy, Maxon decides to hold a ball for Halloween, inviting the Elite's family and requiring everyone to wear costumes.

The morning following the ball, America is awakened by her maids, who tell her to get dressed in dark garments. America follows her maids and discovers that Marlee was caught having an affair with the palace guard Carter Woodwork the night of the ball. As punishment, the two are sentenced to be caned 15 times and stripped of their castes to Eights, the lowest of the low. During the caning, America is unable to stand watching her best friend suffer and tries to free her friend. America is taken by two guards to her room. After the punishment is carried out, Maxon goes to visit America in her room. As he is apologizing, America blames him for not doing anything about it.

Later on, Maxon takes America to the princess's room, where she finds Marlee, who works as a maid in the palace's kitchen. Marlee tells America that she apologized to Maxon for having an affair and says that she loves Carter. Maxon lightens the punishment for both Marlee and Carter by having their caste number lowered to Six and allowing them to work in the palace. Marlee asks America to forgive Maxon, because he wasn't able to do anything. Marlee also adds that she hopes America wins the Selection.

Upon going to the secret library again, America borrows one of Gregory Illéa's diaries with Maxon's permission, just as long as she doesn't tell anyone. As America reads the book, she discovers that the caste system was just invented by Gregory in order to rule over the people. He then changes the democratic government into a monarchy, in which he is king and forces his daughter Katherine to marry an old man so that the his power will become stronger than before.

The rebels return the next morning while the Elites and their families are outside. Instead of going inside the palace, a confused America runs towards the woods and climbs up a tree. After a few minutes, she sees a girl and a boy talking to each other while carrying a lot of books stolen from the palace. The boy leaves and the girl was about to follow when she drops a book in front of the tree America is in. As she picked the book up, the girl sees America. However, instead of raising the alarm, the girl bows at her and runs away, surprising America. After a few hours, America climbs down the tree and runs back to the palace. She is founded by Aspen and taken back.

Later, America discovers that the rebels who took all those books really want Gregory Illéa's diary, which America has in her possession. Meanwhile, Maxon is secretly making pleasurable interactions with the other Elites, making America more jealous.

When walking through the palace, America sees Maxon with Celeste. America becomes hurt and was about to walk away when Maxon catches her and America runs away to her room. A few minutes later, Maxon goes to visit America but she is disgusted of what he had done, and believes that the only one left for her is Aspen.

In the days that follow, America and the other Elites go to Silvia to continue their lessons. Silvia tells them they will have to work on a presentation in which they will debate a topic on live television. America becomes eager to help the people but is unsure of what her debate topic should be. When reading Gregory's diary, she comes up with a debate topic. On presentation day, America shares what is inside the diary and suggests to eliminate the caste system. In the middle of America's speech, however, it seems that the king cut off her presentation. King Clarkson is enraged and confused as to how America knows about how the caste system was formed. Maxon saves America by telling his father that he brought America with him into the secret library. The king is even more furious with America and the queen shakes her head at her in disappointment.

While walking past the medical room of the palace, Maxon exits the room carrying a box. At that moment, the rebels attack the palace once again. Maxon leads America to a secret room that is not as large as the royal escape room, but still safe. America notices that Maxon's back is bleeding and he is forced to show and tell America that his father whipped his back from anger at America. America asks Maxon what the other scars on his back are from, but quickly apologizes for being nosy. Maxon says that it's fine and explains that it's from things he had said or done—or even known. America then asks Maxon about Celeste and Kriss. Maxon admits to her that he has taken a liking to Kriss and that Celeste has been flirting with him. America confesses to Maxon that she has feelings for him, but was too afraid to bring it up because of what has been happening. Maxon also admits that he was planning on proposing to her the night of the Halloween Ball, but became discouraged. America says that she would've said yes if he had asked. The two spend the next few hours together until they are found by the palace guards.

Near the end of the novel, believing that Maxon is going to eliminate her, America prepares to leave the palace and tells her maids about her departure and asks them to assist Kriss. They accept and say farewell. As America is about to leave the palace, Maxon stops her by telling her that he is allowing her to stay in the Selection, despite what she had done, and warns her about his father's challenge, then leaves with Kriss. As America goes upstairs to her room, she comes face-to-face with King Clarkson, who says that she is nothing special and tells her, "Trust me when I say that you do not want to be my enemy." America returns to her room and her maids are surprised but happy that she is still in the Selection. The novel ends with the four of them beginning to plan how America will win the Selection. 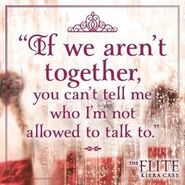 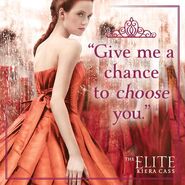 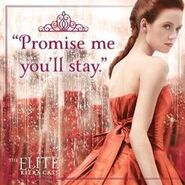