Marlee Tames came to the palace to win Prince Maxon's heart — but her own heart had other ideas. "The Favorite" goes behind the scenes of Marlee and Carter's life together, from the fateful night their secret was discovered to the events at the end of The One.

This novella begins with Marlee meeting a palace guard named Carter Woodwork. Soon (in The Elite, after the Halloween Ball) she was found in a closet with an unzipped dress, a kiss, and a certain topless guard, because she fell in love with him, not Maxon. In the beginning, Marlee is in her cell, and revisits many of her previous experiences with Carter. Later, Marlee is visited by Maxon, whom she apologizes profusely to and says that she accepts her fate to die, not knowing that Maxon had changed it. When she learns that both she and Carter would be caned fifteen times, she says that she would take that beating for Carter, if it meant that he would be alright. Maxon laughs at this and remarks that he had just visited Carter's cell, and that the former guard had declared that he would do the exact same thing for Marlee. It finishes with the couple being pardoned of their punishments and becoming the first casteless citizens in Illéa. 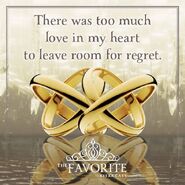 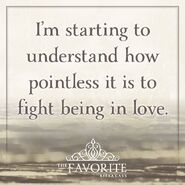