The Heir is the fourth novel of The Selection Series, released on May 5, 2015. The Heir is from a new perspective, Maxon's and America's daughter, Princess Eadlyn. Many known characters and new ones appear in the story.

The Crown, a sequel to The Heir, was released on May 3, 2016. It is the final full-sized novel in The Selection Series, and the end of Eadlyn's Selection.

Twenty years ago, America Singer entered the Selection and won Prince Maxon’s heart. Now the time has come for Princess Eadlyn to hold a Selection of her own. Eadlyn doesn’t expect her Selection to be anything like her parents’ fairy-tale love story. But as the competition begins, she may discover that finding her own happily ever after isn’t as impossible as she always thought.

Back-Cover (Amazon.com) Princess Eadlyn has grown up hearing endless stories about how her mother and father met. Twenty years ago, America Singer entered the Selection and won the heart of Prince Maxon—and they lived happily ever after. Eadlyn has always found their fairy-tale story romantic, but she has no interest in trying to repeat it. If it were up to her, she'd put off marriage for as long as possible. But a princess's life is never entirely her own, and Eadlyn can't escape her very own Selection—no matter how fervently she protests.

Eadlyn doesn't expect her story to end in romance. But as the competition begins, one entry may just capture Eadlyn's heart, showing her all the possibilities that lie in front of her... and proving that finding her own happily ever after isn't as impossible as she's always thought.

The book begins with 18 year old Eadlyn explaining that she was born seven minutes before her twin brother, Ahren. Previously, it would be his right to be the heir to the throne of Illéa, but their parents King Maxon Schreave and Queen America Schreave changed the law and made it possible for Eadlyn to be the first female ruler of the country, something that often overwhelms her, but also makes her feel powerful. Maxon and America have two more sons: Kaden, who is 14, and Osten, who is 10.

Her father has eliminated the castes, but although people were initially relieved, many citizens begin to riot all over the country due to post-caste discrimination. To distract the attention of the public until they can figure out a way to fix the situation, her parents suggest that Eadlyn should go through her own Selection. Eadlyn strongly opposes to the idea, as she doesn’t feel ready for marriage and she doesn’t want to love and be married with a stranger. However, she reluctantly accepts to have a three month Selection, for the sake of the country's entertainment, and of her parents, who agree that it’s all right if she doesn’t choose anyone in the end.

Eventually, 35 men are randomly selected, among them Kile Woodwork, son of Carter and Marlee Woodwork. He strongly rejects his selection, insisting that he didn’t actually apply for it. However, since his name was announced publicly, he is forced to participate, much to his and Eadlyn’s resentment. The two dislike each other, even though they have been raised together in the palace.

During the first interview with the Selected Suitors, some of the Selected catch Eadlyn's attention, like the polite Hale Garner, the over-confident Ean Cabel and the always-happy Henri Jaakoppi from Swendway who can only speak limited-English, and participates in the Selection with the help of his translator, Erik. To impress the country, she organizes a parade through the city, so that people can admire her and the Selected Men. The parade is ruined when some people from the crowd throw food to her, insulting her and demanding jobs. Eadlyn starts to realize that part of the population dislikes her, so Ahren suggests that she should not appear so distant and scowling, especially in the photos of the Selection.

To pique the people’s interest, Eadlyn publicly eliminates 11 of the Suitors, a rather drastic cut. Unfortunately, the papers criticize her again as a smug, strict princess, uninterested in her own Selection. Deciding then to give some romance to the public, even if she isn’t interested in these men, Eadlyn asks from Kile, the only Selected Man she knows, to kiss her in front of a hidden photographer. The kiss leaves her unsettled, as she didn’t expect to like it so much.

Eadlyn then goes on a date with Hale. They talk about his life and family, but when he asks about her fashion sketches, a hobby of her, she is afraid of opening herself to him and she leaves. She has another date with Baden Trains, playing music together. She asks from Kile one more time to kiss her, insisting however that she doesn’t like him and she won’t choose him. She later goes on a movie date with Jack Ranger. When he touches her inappropriately against her will, she panics and kicks him out of the Selection.

During a horse riding date with Ean, he understands that Eadlyn doesn’t actually want the Selection. He proposes to her that, if she finds no one suitable in the group, she can choose him. While he can settle in a comfortable life as her prince consort, she will be free to reign however she wants without ever loving him, as he believes love to be overrated.

Later, Eadlyn cooks in the palace kitchen with Kile, Burke Renn, Fox Wesley, Henri and Erik. However, Burke gets angry when Henri, being a professional cook, makes an exceptional dessert, while Burke's appetizers with Fox were mediocre. He punches Fox and accidentally pushes Eadlyn to the floor during the fight, while Kile and Henri try to suppress him. Erik takes Eadlyn away from the brawl and into her room. He reveals that his given name is Eikko. She thanks him for his help and as they bond their hands, she realizes his kind nature.

Burke is sent home. Eadlyn talks with Fox and after learning about his poor background, she decides to let him stay, as he wasn’t really responsible for the fight. Eadlyn has one more make out session with Kile, but this time she talks with him about the Selection, realizing that it’s easy to share her thoughts with him and admitting that she is glad he was selected.

Eadlyn learns that people in the poorer provinces are uprising to end the monarchy, as they didn’t benefit from the caste dissolution and they think that the King doesn’t care about them. Later that night, Eadlyn finds Henri cooking in the kitchen. After cooking together, they share a hesitant, romantic kiss. However, Eadlyn is still afraid of falling in love, although she finally realizes that she really likes some of these men.

Baden announces to Eadlyn he wants to leave from the Selection, feeling ignored by her and displeased that she didn't pay attention earlier to his date invitation. He accuses her of being pushy and selfish. Hurt by his words, she cries in her room, realizing that probably a lot of people have this opinion of her. At that moment, Erik appears and comforts her. He mentions that Henri thought she was upset by their kiss, but Eadlyn assures him that Henri is one of the kindest people she had ever met. Erik reveals that Henri admires her and desires to be her husband, but then he adds that Henri’s language barrier will be a long-term obstacle if she develops feelings for him, too. He offers to be her friend and she happily accepts.

Eadlyn talks with Kile who comforts her, both of them admitting that they now want to participate in the Selection, even though she is still afraid to open herself to the boys. As he is studying architecture, he reveals to her a design idea to create small houses for industrial workers in the poorer provinces.

Eadlyn invites to the palace the French princess Camille, daughter of Queen Daphne and heir to the throne of France. Camille is in a relationship with Ahren, the two of them have been completely in love for years. This makes Eadlyn uncomfortable and slightly jealous that she has never felt such love, and that Camille holds an equal standing to her in Ahren's life. Even more, Camille is always and effortlessly kind and cheerful and people love her, exactly the characteristics that Eadlyn wishes to have.

During a party made in honor of Camille, Eadlyn finds Erik, looking handsome in his formal suit. After confiding to him her thoughts about Camille, he reassures her that she shouldn’t want to imitate the French princess, because being herself is more than enough. Holding her hand and hesitantly stroking it, he admits that he didn’t put his name in the Selection, because he is not someone important, but Eadlyn insists that “he is Eikko”: being himself is enough too. She later dances happily with Henri, noticing though that Erik watches them with a sad smile.

Eadlyn advises Ahren to break up with Camille, stating that maybe she is not the one for him, making him sad. During the dinner next night, Gavril Fadaye announces to Maxon, America and Eadlyn that Ahren eloped with Camille: they had left Illéa and secretly got married in France, after Queen Daphne gave them her official approval. Eadlyn runs to her room, where she finds a letter from Ahren.

In the letter, after begging for her and their parents’ forgiveness, Ahren explains that he decided to marry Camille, after Eadlyn told him to leave her. He realized that his sister disliked his girlfriend only because she was afraid that Camille would "steal" Ahren from Eadlyn. Eadlyn wanted her brother so much in her life, asking so many things from him that she would maybe even force him to take the throne for her sake. So, much as he loved his sister, he eventually chose his soul mate. He points to Eadlyn that while Camille is open to her people and handles her power with humility, Eadlyn keeps people at distance and wields her power like a sword. As a result, many provinces don’t want her as their future ruler and she is one of the reasons they are now in a riot. Thus, Ahren advises her to open herself to her people, to be brave and feminine at the same time and above all to find love in her life.

Eadlyn is angry and hurt by his words and his departure, but when she goes to her parents’ room to inform them about the letter, she finds photos of them during their own Selection, their wedding and the birth of their children. Eadlyn recognizes that her father had modeled this room as a shrine of his love for her mother. Fully realizing now the love her parents share, she can understand why Ahren chose his girlfriend over his family.

At that moment though, she learns that her mother has had a heart attack, after hearing about Ahren’s elopement. She runs to the hospital wing, where she finds her father crying and General Leger comforting him, both of them hoping for the best. Marlee, Kaden, May and the Selected Men also come to pray for America’s recovery. Afraid of losing her mother and after seeing all those people around her and the bonds they share with each other, Eadlyn finally realizes the importance of love in her life. She decides that she wants to find in the Selection someone who will love her, stating that at the end of the Selection, she "will have a ring on her finger." 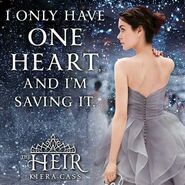 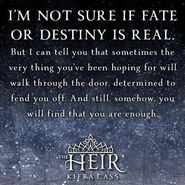 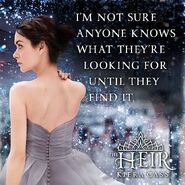