The Selection Wiki
Register
Don't have an account?
Sign In
Advertisement
in: Books, Novellas, The Selection Series

The Selection Stories: The Prince and The Guard

The Favorite
The Queen is a novella in The Selection Series that is told from Queen Amberly's point of view, about her own Selection competition to win King Clarkson, father of Maxon Schreave, when he was the Prince. It was released separately on December 2, 2014. It was also released on October 13, 2015 together with the novellas The Favorite, The Guard, an extended version of The Prince, the bonus epilogue of The One and three scenes in Celeste's point of view in the hardback Happily Ever After.

Before America Singer's story began, another girl came to the palace to compete for the hand of a different prince . . .

This prequel story takes place before the events of The Selection and is told from the point of view of Prince Maxon's mother, Amberly. Discover a whole new Selection with this inside look at how Maxon's parents met — and how an ordinary girl named Amberly became a beloved queen.

It tells the story of the former Queen Amberly and the former King Clarkson's Selection. 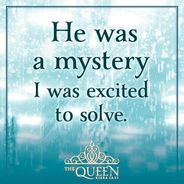 Amberly writing a letter to her sister Adele 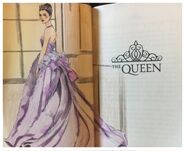