This article is about the novel. For other uses, see The Selection (disambiguation).

The Selection is a young-adult, dystopian, romance novel by Kiera Cass. It is the first book in The Selection Series, followed by The Elite, then The One. It was released on March 26, 2012 (paperback) and April 24, 2012 (hardcover, Kindle, and audiobook).

For thirty-five girls, the Selection is the chance of a lifetime. The opportunity to escape the life laid out for them since birth. To be swept up in a world of glittering gowns and priceless jewels. To live in the palace and compete for the heart of the gorgeous Prince Maxon.

But for America Singer, being Selected is a nightmare. It means turning her back on her secret love with Aspen, who is a caste below her. Leaving her home to enter a fierce competition for a crown she doesn't want. Living in a palace that is constantly threatened by violent rebel attacks.

Then America meets Prince Maxon. Gradually, she starts to question all the plans she's made for herself and realizes that the life she's always dreamed of may not compare to a future she never imagined.

In a dystopian fairy-tale world where war has given rise to a kingdom named Illéa, society is divided into castes. Each caste has a role whether it is as an artist, a farmer, or a factory worker. One is the highest caste and contains people like royalty, while Eight is the lowest caste and contains the poorest people who do not have means of employment. While it is possible to climb castes, it is very difficult and does not happen often.

America Singer, who is a Five (the artist caste) has just received a notice stating that the prince of Illéa, Maxon Schreave, would be following in his father's footsteps by holding the Selection, a competition for the prince's hand and a crown. Despite pressure from her mother, America has no interest in entering the competition, because she already has Aspen, her secret boyfriend that she's in love with.

America decides to have a surprise dinner at the tree house with Aspen. Instead of being happy however, Aspen is upset because he believes he should be the one to provide for her, but is unable to because he is a Six (the servant caste) and has no means of providing for her since he already has to take care of his mother and siblings. In the end, Aspen decides to break up with America. The end of their relationship, plus a bribe from her mother, leads America to entering the Selection and later into the palace where she has to compete with 34 other girls to win the prince's heart. It also helps that her time in the palace is accompanied by a small stipend sent to her family.

America easily makes friends (Marlee Tames) and enemies (Celeste Newsome) within the first week of her stay, but her unique personality also catches the attention of the palace staff and the country. However, she still doesn't want to marry Prince Maxon, but a chance meeting in the gardens causes them to befriend each other. America still loves Aspen, but she gradually starts to fall in love with the prince who is nothing like what she imagined. It doesn't help that Maxon gives America his first kiss, and she begins to think that she could maybe marry him and forget Aspen. It also doesn't help that rebels constantly attack the palace, which helps turn away the weak-hearted competitors, but also makes things tense, especially when the rebels seem to be getting closer. Things also become tense in the competition when America starts to feel jealous of Maxon spending time with the other Selected.

America eventually sees Aspen again when he enters the palace as a new member of the guard. He was apparently drafted into the army where he earned top honors. Aspen's appearance confuses America's feelings even more and she begins to feel like she is still in love with him when he sneaks into her room to see her. Having any kind of romantic relationship with someone other than the prince during the competition is considered treason, and the punishment for treason can be as severe as death. Despite knowing the consequence, America can't help but be with Aspen.

After another attack from the rebels that leads to three of the Selected leaving, Prince Maxon decides that he will narrow down the girls from ten to six, calling them The Elite. When America's name ends up amongst the six chosen to stay, she is surprised how relieved she feels and realizes that she does have feelings for Maxon and could see herself happy with him. With this in mind, she tells Aspen that she cannot continue their romantic liaisons. Instead of getting discouraged, Aspen claims that he will fight even harder to win her love again over Maxon. The book ends with America finally realizing that she is exactly where she ought to be — among The Elite. 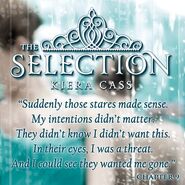 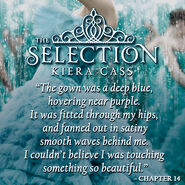