In Barnes & Noble edition of The Heir there is an exclusive bonus scene featuring a written conversation between Kile Woodwork and Fox Wesley.

It takes place after chapter 25. After Burke Renn punched Fox, hit Kile and Henri who tried to suppress him and accidentally pushed Eadlyn to the floor, he was sent home. Fox however talked with Eadlyn and after she learned about his poor background and realised his good nature, she allowed him to stay.

Here are the photos with the bonus scene. Zoom in to read the text better. 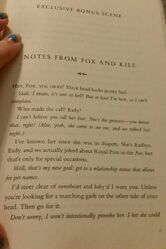 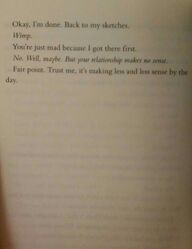 Barnes & Noble The Heir bonus scene, page 4
Add a photo to this gallery

Retrieved from "https://theselection.fandom.com/wiki/User_blog:Mina18/The_Heir_Barnes_%26_Noble_Exclusive_Bonus_Scene_with_Kile_and_Fox?oldid=21302"
Community content is available under CC-BY-SA unless otherwise noted.